5 THINGS NOT TO BE MISSED IN SEVILLE - BookitList

5 THINGS NOT TO BE MISSED IN SEVILLE

Seville was on my bucket-list for years. I was always attracted by flamenco, world explorers who set off to the New World from this city, and Moorish architecture. When I finally booked my flight to the south of Spain, I made sure to visit all the towns I was eager to see. Among them – the charming city of Seville! 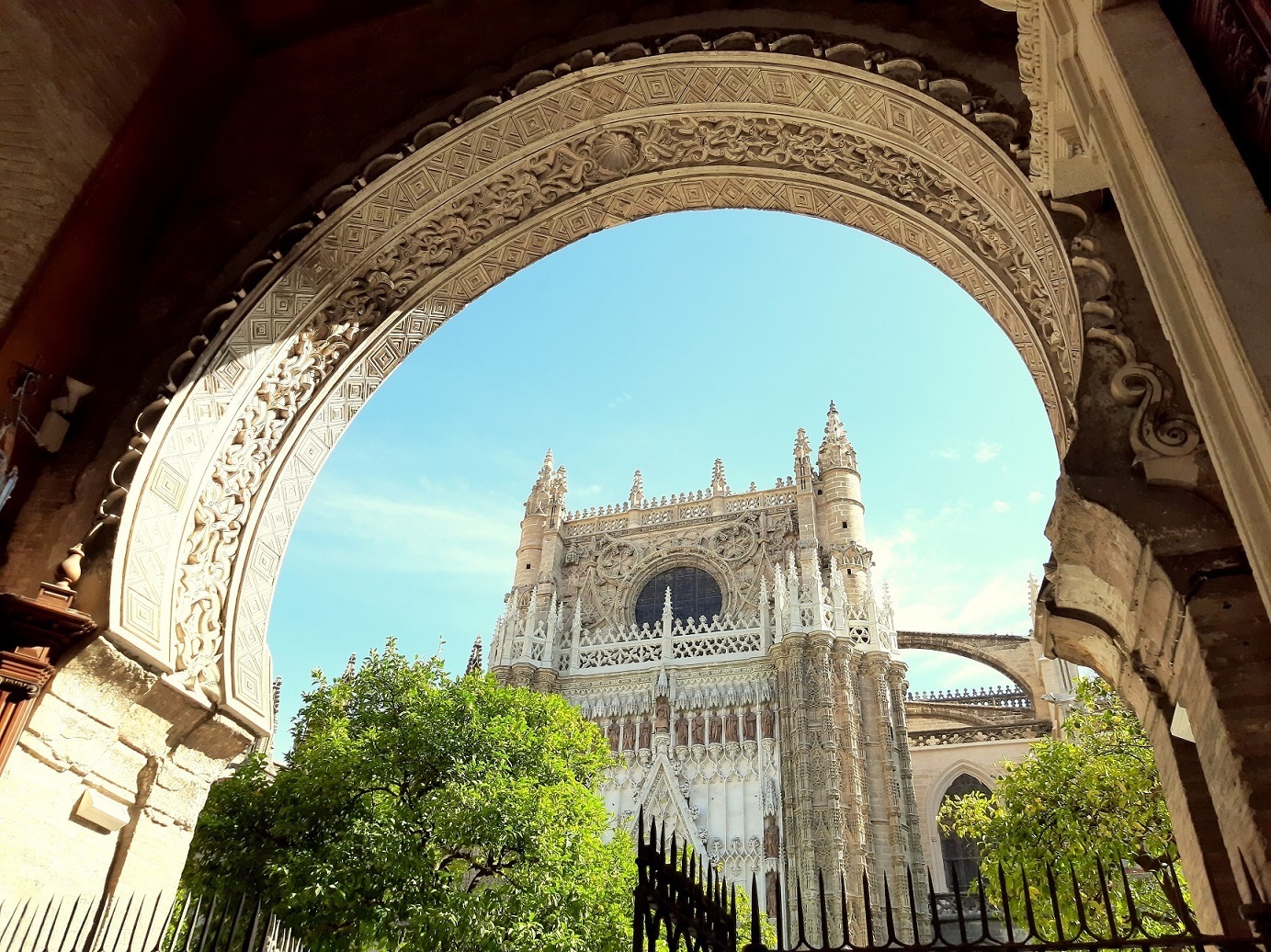 The famous Cathedral is definitely among things not to be missed here. Not only that it is the biggest Gothic building of its kind in the world but it is also home to a great 12-century bell tower called Giralda.

The construction work on the Cathedral began in 1401 and it was built for the whole century. Among spectacular columns, altar and breath-taking ceiling, there lies an important tomb. This is where Cristopher Columbus was buried, the great explorer from Genova who found the New World and died in 1506.

I was trying to imagine what the old mosque must have looked like, given that it was destroyed to give way to this magnificent Catholic Cathedral. Still, what remained was the 103-meter minaret built in 1195 that was later turned into a bell tower.

It is possible to climb the 35 stories to the top. A steep path with no stairs will take you to huge bells and a gorgeous view of the city. 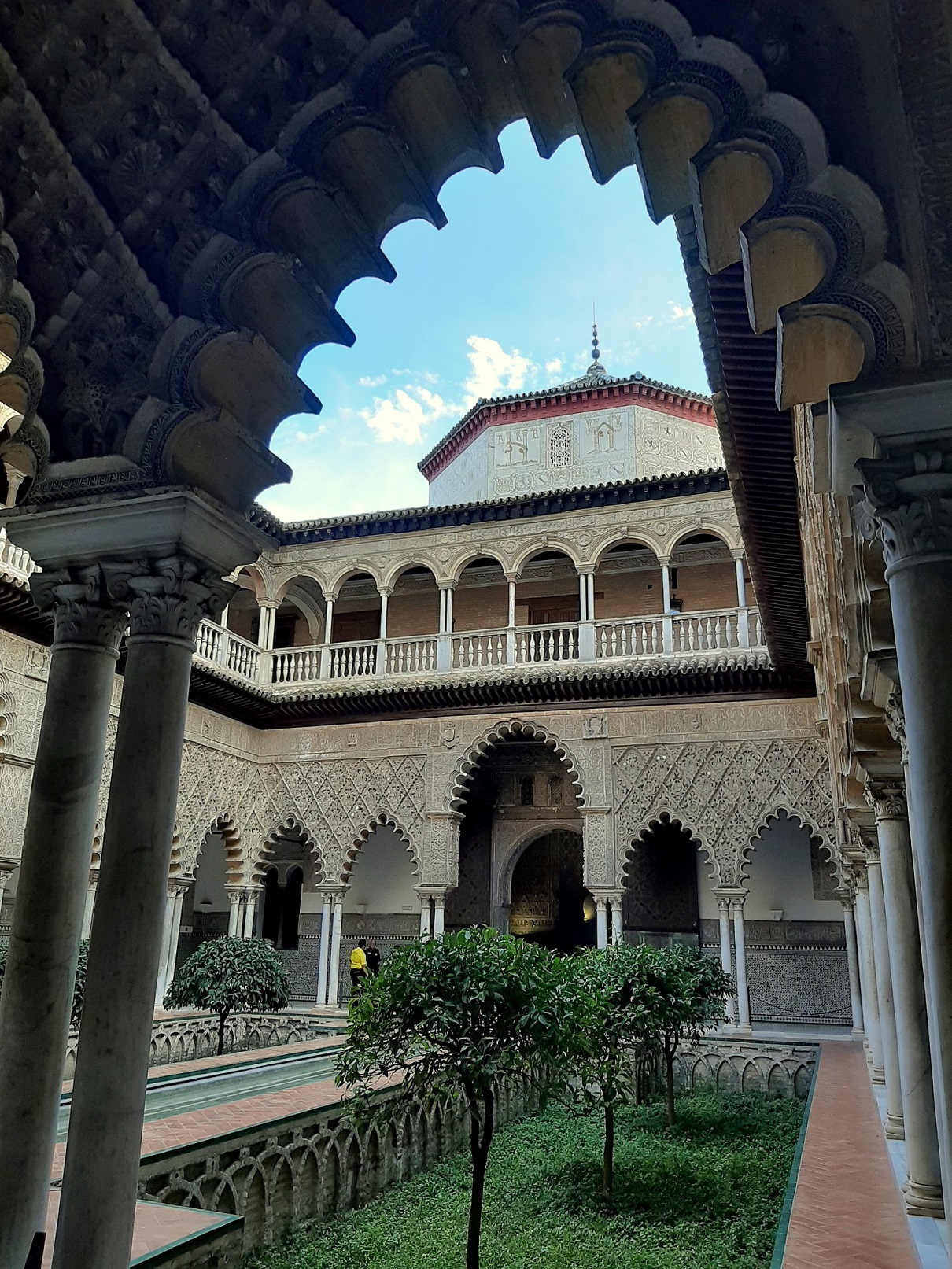 This is one of the Andalusian palaces that will immediately transport you into One Hundred and One Nights.

Even though it was mostly erected by king Pedro the Cruel of Castile in the 14th century, his artisans and craftsmen were from Cordoba and Granada. They created the luxurious palace in Moorish style that was extremely popular and prestigious at the time. Hence decorative arches, beautiful ornaments, fascinating tiles.

Some premises will be hard to miss like the Hall of Ambassadors with beautiful wall reliefs and fairy arches, Patio of the Maidens with numerous columns and a pond, etc. However, this palace also houses a few gorgeous Renaissance-styled halls. 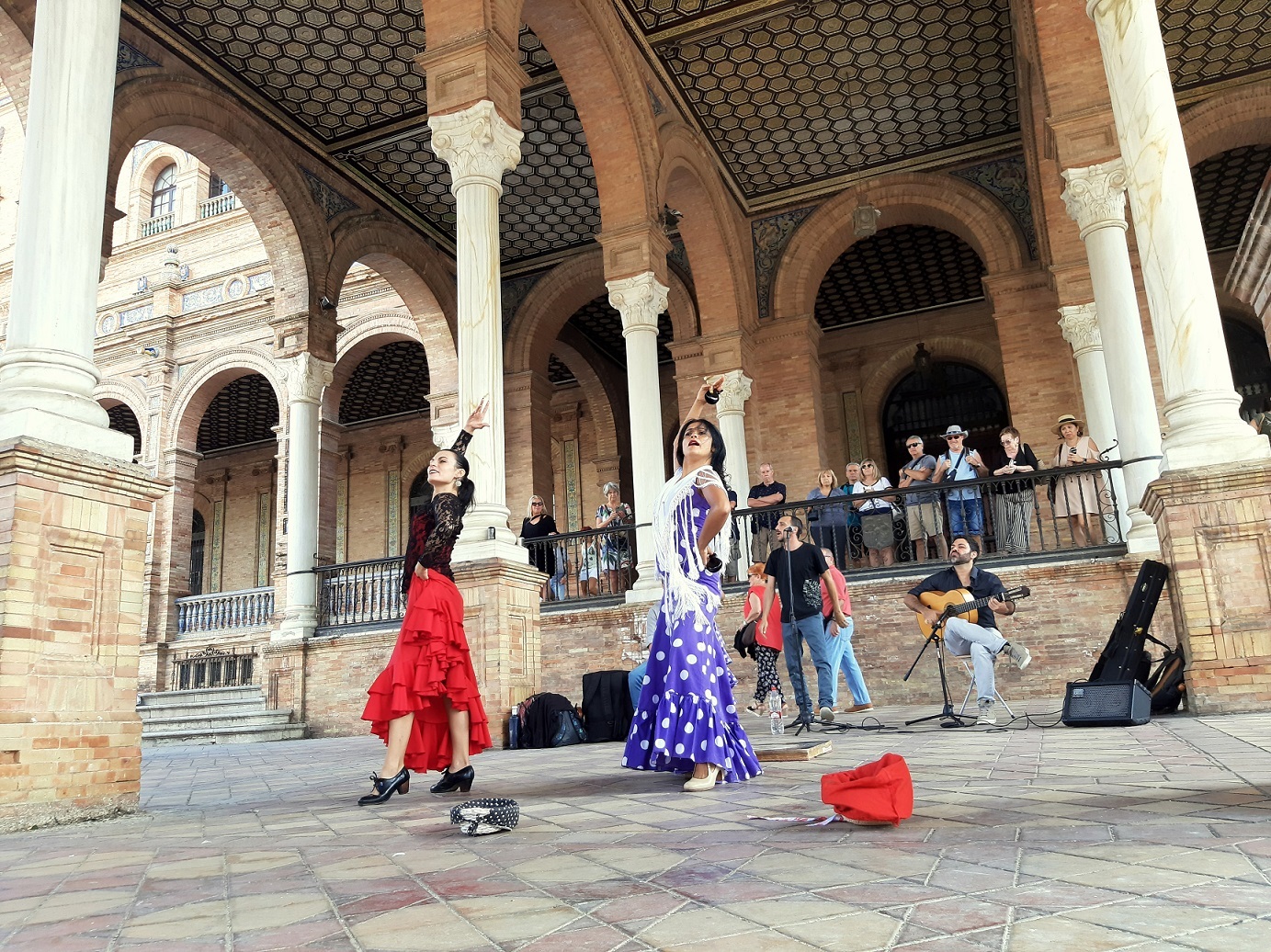 World exhibitions often leave a mark on European cities and it happened to Seville as well. The 1929 Ibero-American exhibition turned this part of the city into the so-called Plaza de Espana or the Spanish Square.

It houses the 500-meter channel and four bridges that represent the four Spanish kingdoms. The niches are decorated with historic scenes. Everywhere you turn, you will be able to admire typical ceramic tiles.

In the shadows of a large decorative building, there will be flamenco performers playing and dancing for tourists. Make sure to enjoy at least one show. And buy a fan while you are here. 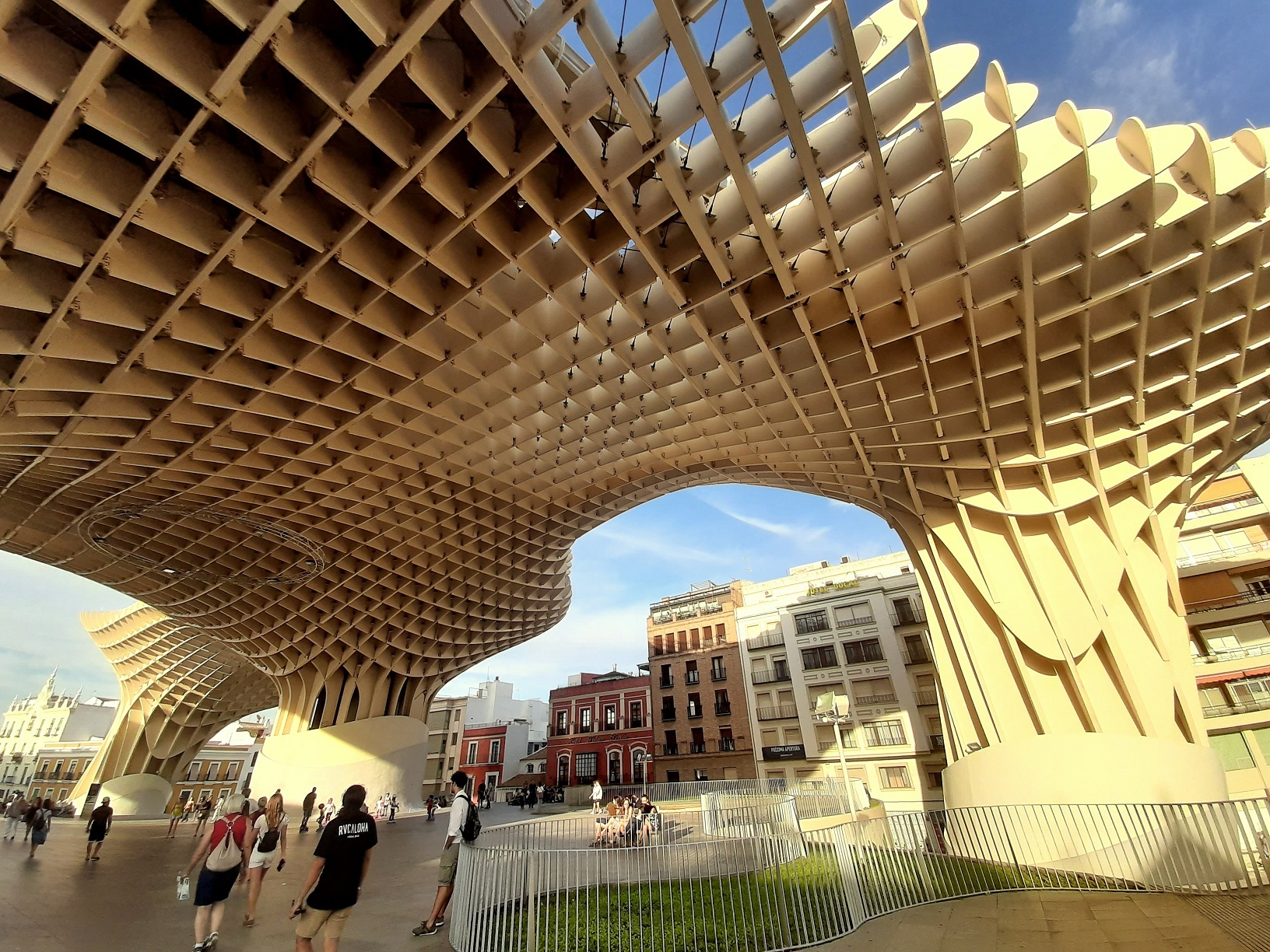 The Metropol Parasol in the old quarter of Seville at La Encarnacion square is one of the most photographed landmarks in recent years. It was built in 2011 as one of the largest timber structures ever. Sevillians simply call it Las Setas or the Mushrooms.

Visitors can see the Archaeology Museum in the underground and a 360-degree viewpoint on the top.

The structure reminded me of waffles. This was a nice place to take a rest given that I walked all the way from the picturesque La Macarena neighborhood. (Yes, the song also originated from Seville!) 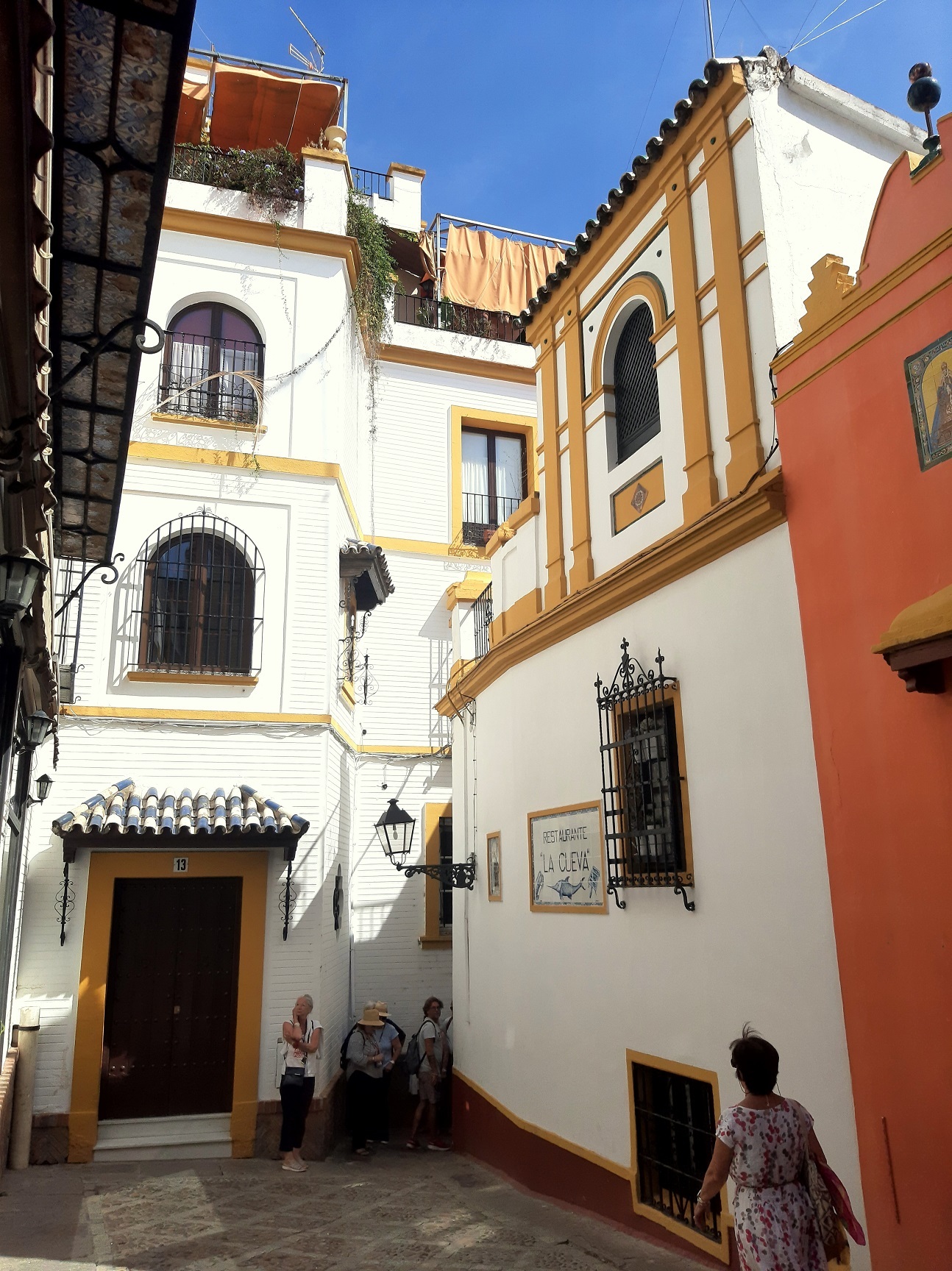 If you are interested in an authentic atmosphere and things to do in Seville, the place not to be missed is certainly the Santa Cruz district. There is something about losing yourself among narrow streets with tavernas and tapas bars at every corner, charming archways, flower pots, that you will never forget.

Santa Cruz district was formerly known as the Jewish Quarter. It was mostly populated by Jewish community members of the city. Almost all the churches that are situated here were once – synagogues.

Every time I took a tour around the city, visiting another neighborhood or a landmark, I tried to come here for lunch or coffee. Small allies were so perfect to escape the crowds while being in the bustle of the city at the same time. The area is even more surreal with dimmed lights at night.

And I couldn’t believe that it was almost demolished for the 1929 Expo purposes with a plan to build a modern avenue instead!

Passionate traveler, journalist, and travel blogger - in love with the world!