The Truth Behind Rio De Janeiro During The Pandemic - BookitList

The Truth Behind Rio De Janeiro During The Pandemic

The world has been turned upside down.

Airports have transformed from teeming hives of frantic passport carriers to empty halls where the only notable activity is a lonely custodian hoarding a floor buffing machine, sheening floors that will barely see a footprint by the days end. Since the outbreak of the pandemic, I have returned from India (after being stuck there 4 months longer than intended) and left once again to Rio De Janeiro. 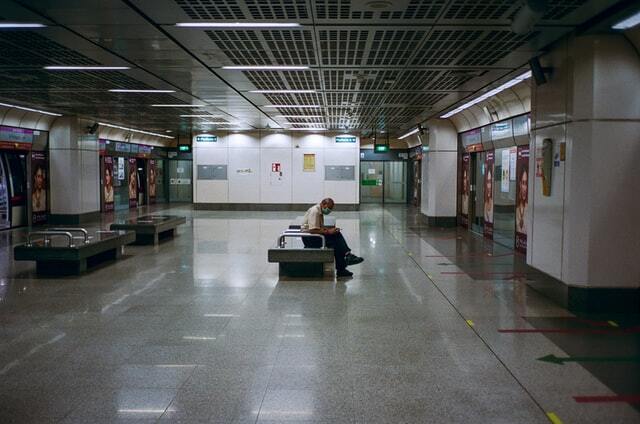 According to various media outlets, Brazil had been one of the worst-hit countries during the pandemic and with such a disparity between it’s affluent and breadline teetering neighbourhoods, one can imagine how the poorer half of the country would’ve taken on the brunt of the damages.

But has Brazil ground to a halt like much of the U.K seemed to, or was it coping in a very different way?

Given the difference in scale, relative wealth, cultural customs and social attitudes I was certain that Brazil would be at least a little different in their response compared to back home (Nottingham, England), a sentiment I soon found out held more than a modicum of truth.

Note: I confess, I am not an authority on the socio-economic workings of Brazil or any nation for that matter, and I am not sifting through statistics to give a fair and balanced assessment of Brazil, I am merely a pair of boots (or in my case flip flops) on the ground, reporting what I see and hear on a daily basis living in Rio De Janeiro for the past 3 months.

The airport protocols and plane ride to Brazil were as you’d imagine. More hazmat suits than the ‘contamination’ scene in Monster Inc.

However, on arrival, Ubers and taxis were as normal with the exception of face masks being compulsory. To give a comparison, leaving the airport in India I was confronted with a squadron of cleaners hoisting around more gear than the Ghostbusters. The entire exterior and interior of every vehicle were sprayed with a cleansing agent before each ride, all under blue lights in order to spot anything else unsavoury that had been left on the wrinkled backseat leather.

At first glance at least, Brazil was at least slightly more relaxed about cleaning protocols than India. 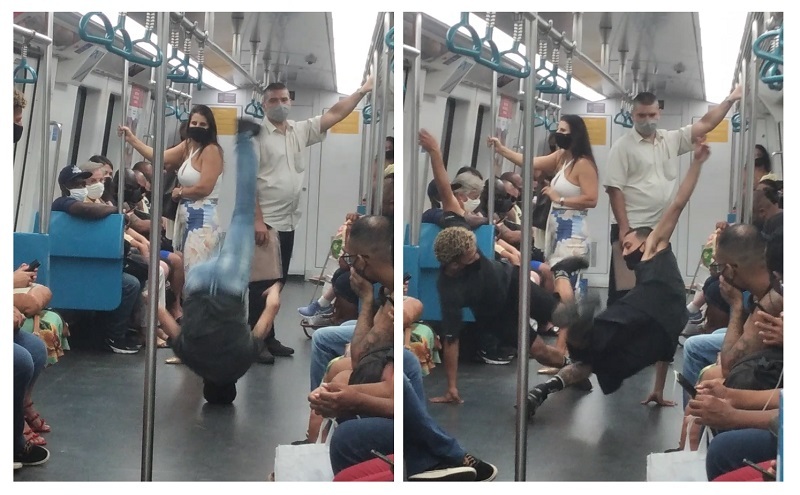 The metro in Rio is, in my opinion, the best way to get around. Not only does it come with talented performers like the breakdancers pictured above, it’s reliably on time and covers the city slightly quicker than an uber can in regular traffic. Metro’s are running as usual, with the same regularity and volume of passengers with the facemask rule being the only difference. There are no notable hand sanitising stations in the Metro, and food and kitchens in the stations are running as normal.

You’ll begin to notice a recurring theme here. Facemasks are compulsory until you’re seated at your table, and hand sanitiser is provided usually although not always. Coffee shops are wide awake with the caffeinated keyboard tapping you'd expect from any modern metropolis. As a digital-nomad, coffee shops have become my preferred place of work over the years so this element of Rio being open is a lifesaver. The same options were not afforded to me in India during the pandemic. 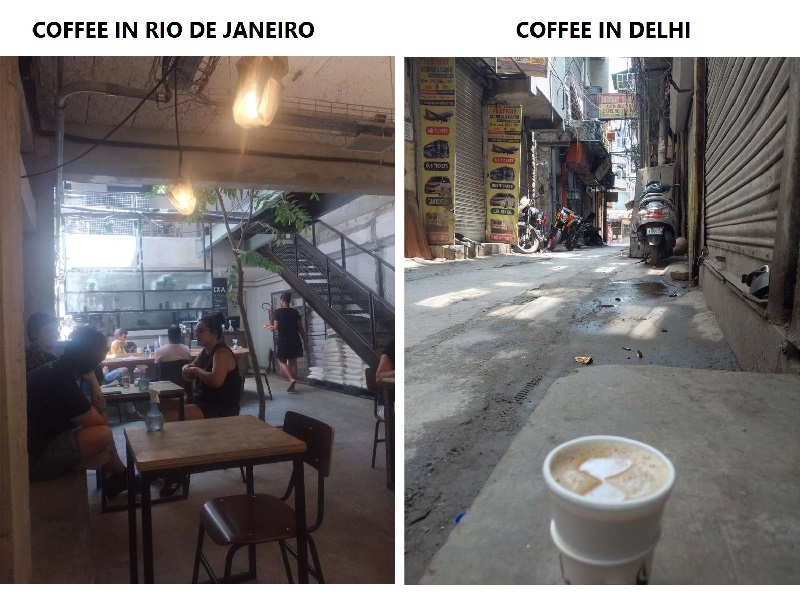 The opening and closing times for restaurants have not moved one iota and if you’re in the mood for a traditional Brazilian steak at 11 pm, you will not be left wanting. As is the case with the Metro, the facemask rules are the only ones that distinguish life pre and post covid.

Whilst falling into my blue eyes like a scuba diver exploring the great blue hole of Belize might seem tempting, don’t let them fool you. I am not Brad Pitt and I am certainly not a phenomenal athlete. I do however love mixed martial arts and train mostly in Muay Thai, and thankfully after a long hiatus No-Gi Brazilian Jui Jitsu. 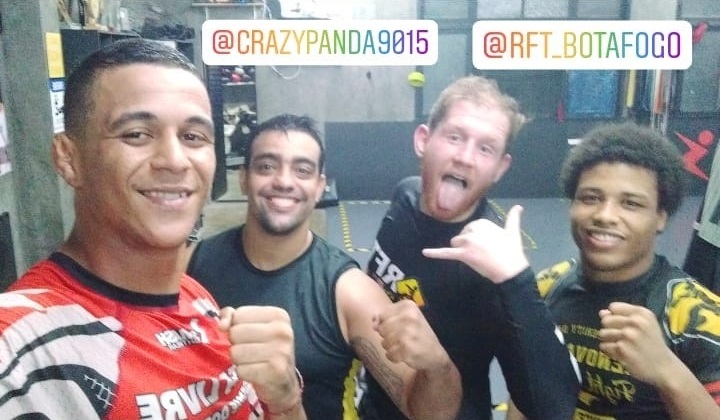 If you were to be working full time for the imaginary commission of disease spreaders, you’d most certainly put a large portion of your advertising campaign into encouraging people to take up Brazilian Jui Jitsu.

An art form that involves being so intimate with your rolling partners, you could recognise their pheromones blindfolded in a field of manure. Being choked to the brink of losing consciousness with a man vined across your back is hardly safe social distancing practice. If any activity were to be precluded from the public to stop the spread, then this would be it. 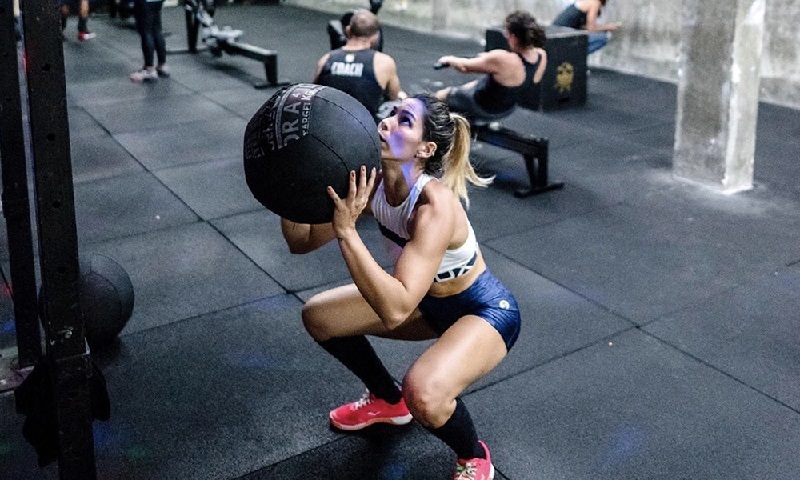 Brazilians love Jiu-Jitsu every bit as much as they love Acai and almost as much as they love football. The pandemic may have put a halt to it temporarily, but the past few months have seen a return to ordinary grappling routines with sweaty adults rolling around the floor (literally) for 90 minutes at a time creating a makeshift petri-dish for the spread of infections on the gym floor mats. That being said the cleaning protocols in between sessions is stringent to reduce the risks.

Gyms, yoga studios, beach training sessions during sunset and CrossFit boxes are open and thriving as though nothing had happened.

This is where the lenient restrictions you may see elsewhere in Brazilian culture become none existent. The drinking culture is very different in Brazil from the U.K. Draught beer is replaced by 600ml bottles that are shared across the group in small glasses we might consider only big enough for an espresso. 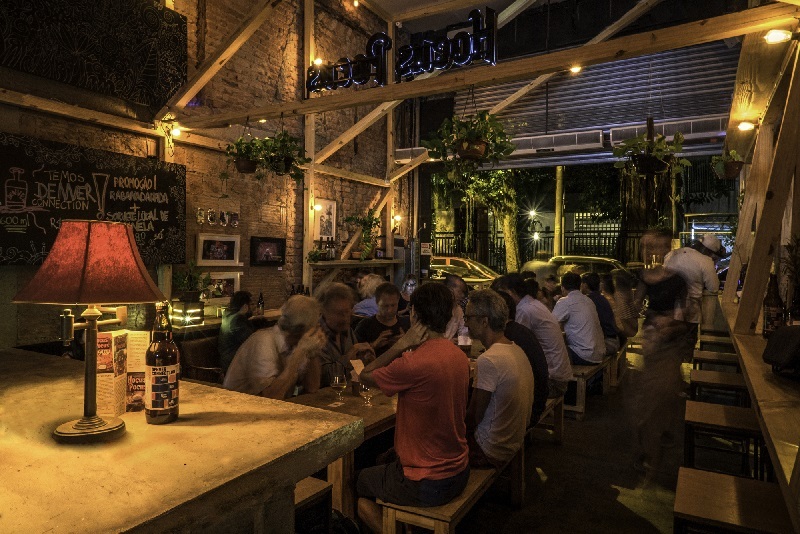 Whilst British drinkers prep themselves with preening rituals and throwback something that tastes violently acidic as a “pre-drink” before heading out in search of nostalgic dance tracks and late-night diet destroying kebabs, Brazilians begin early and keep a steady pace from sunny afternoon until the early hours.

We not only drink faster and in a shorter window than our Brazilian counterparts, but we are also partial to a pint with Sunday lunch whilst the football is on. That makes it a Tortoise vs Hare (of the dog) comparison. Facemasks become none existent in the drinking districts of Rio during nightfall. Group hugs, handshakes, samba dancing and high fiving strangers become mandatory at every turn. 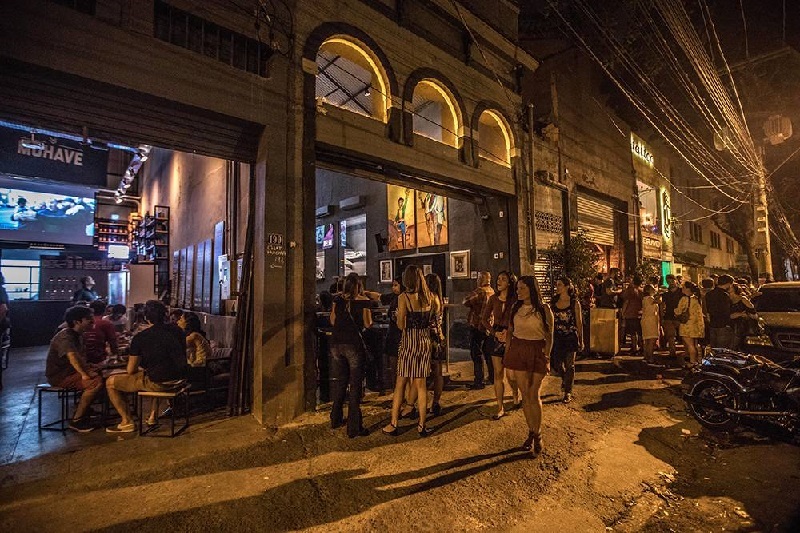 Lapa the main party district in Centro is heaving with merry cocktail sippers and Funky House dancers. However having spoken in a semi-drunker stupor to the locals, the current density of the crowd is around half of what it was pre-pandemic, so a decent chunk of the Carioca faithful has decided to eschew the party crowds in favour of social distancing.

What Lapa looks like when it’s full capacity remains a mystery, but given the bustling hedonism that is to be found there in the current climate, I’m not sure I’m cut out for that level partying. If you want to experience Rio’s nightlife, you can feel it in full swing, even on weekdays.

Rio’s charm is centred in large part around its unique geography. Granite rocks pierce the sky above and provide a barricade for the waves to crash into on ground level. Verdant mountainous outcrops and dense green hills decorated with the lego-like compact confinements of the Favelas provide a staggering contrast to the skyline. 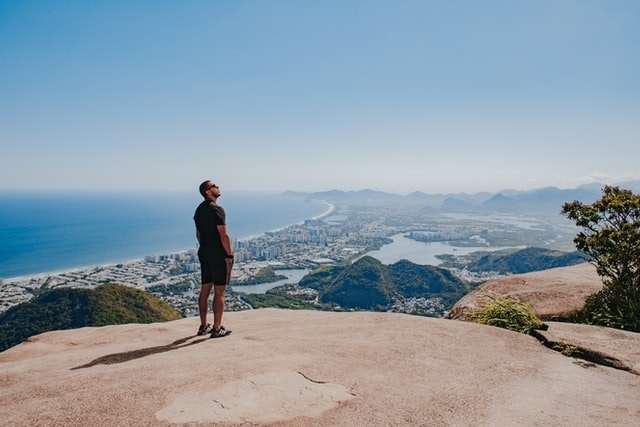 It’s no wonder Carioca’s love the great outdoors so much when their outdoor spaces are so great. Beaches run parallel to running and cycling trails so you can keep fit with the oceans rhythmic pulsing for a soundtrack. But how has Covid-19 affected the outdoor activity lifestyle in Rio.

In terms of logistics, not at all. Beaches, especially at the weekend, are adorned with countless bronze-skinned locals lapping up the waves and sun in equal measure, however, weekdays are a much more spacious affair. According to some friends, the beaches during the week are running at only 40% of their usual capacity, meaning the locals are fairly conscientious in the week about not overpopulating public spaces. 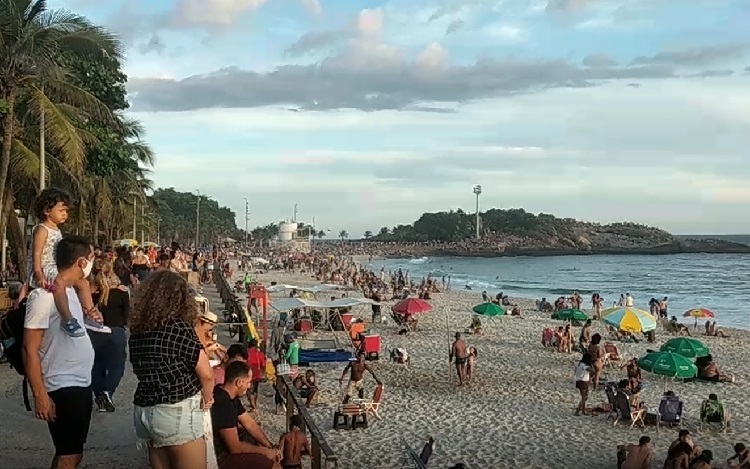 However, come to Copacobana on a Saturday and begin to fathom that anything has happened that might have hampered the popularity of the beach. It’s unthinkable. Countless groups of men performing acrobatic keep up skills with a football, backheeling and shoulder rolling the ball to one another without it ever touching the ground. Groups of young women take turns capturing the perfect sunset snapshot for one another's latest Instagram post. Families take their children fo their first paddle in the sea.

Beaches in Rio are business as usual come the weekend. No masks, no sanitisers, no government intervention. The same can be said of public parks. Trails are open and there have been no special rules put in place for outdoor activities as far as I or any of my local friends can see.

This is perhaps the most fascinating part of the pandemic in Brazil.

One of the 7 wonders of the world is here, but is it open?

Christ The Redeemer, Sugarloaf Mountain, Selaron Steps are all open with locals and the occasional foreigner visiting them on a daily basis. The only real big miss for tourist attractions is the lack of crowds at football stadiums. The Maracana holds an eye-watering 78,838 seats and a Brazil home game with the Carioca fans in full song is surely an experience to behold.

That being said I’m extremely grateful to have had the opportunity to climb the steps of Cristo Redentor (Christ the Redeemer), to have ridden the cable car up Pao De Acucar (Sugarloaf Mountain) and to have literally RAN up the Selaron Steps. I even finished in a podium-worthy third place in the race that culminated with a sprint up the 215 colourful mosaic steps. However, the fact there were a total of 3 contestants slightly dampened the achievement.

If you are hoping to come to Brazil in the near future you can rest assured the Bookitlist items you want to tick off, will all be waiting for you. As a personal side note, I was pleased that the usual volume of tourists is currently lower, it takes just a minute or two for people to give way so you can take an unhindered photo of Christ The Redeemer instead of the usual 10 minutes of patiently foot tapping in wait for a 10-second window to take a semi-decent snap. 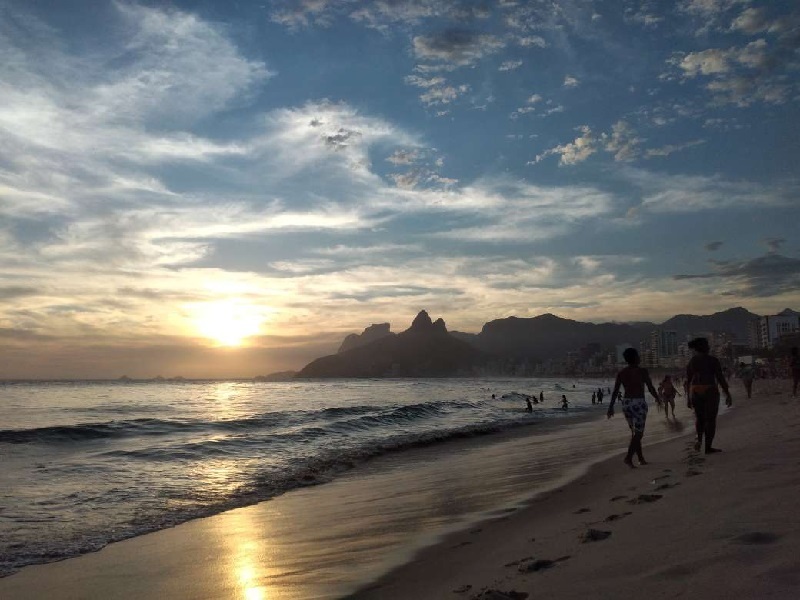 Again I’d like to reiterate that I am not a professional on this subject. I have not correlated stats and cross-referenced them and I am not qualified to do so even if I were to attempt it. I am however someone who’s walked through the length and breadth of almost every neighbourhood in the Zona Sol (South Zone), who speaks to locals on a daily basis and has lived first hand in Rio for 3 months. So anything I am espousing is my personal experience only.

If you’re looking for a world that doesn’t feel obsessed with health and safety protocols, that nudges you towards another cold beer, that doesn’t close at a particular hour, then Rio is for you my friend. 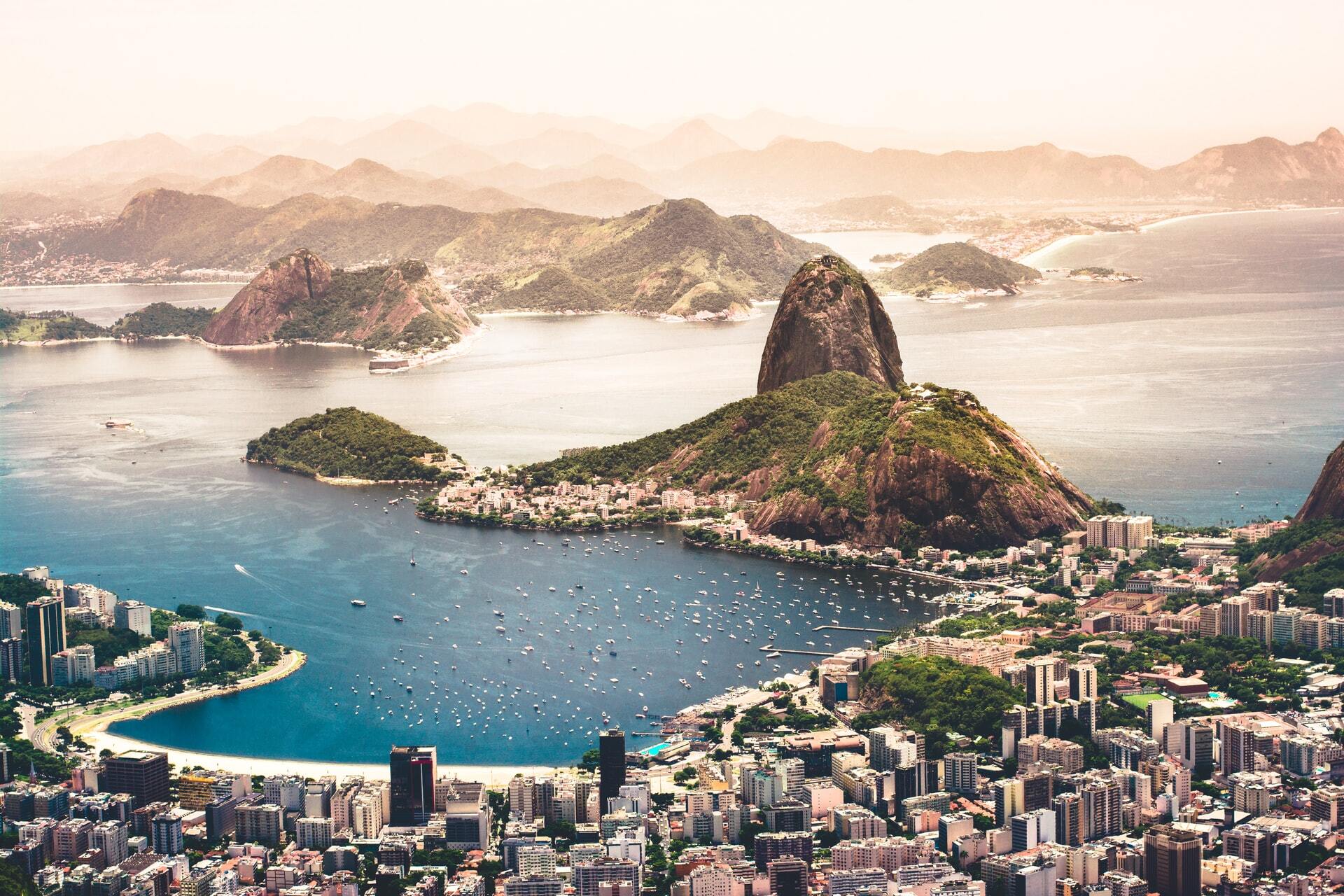 Want To Tick Christ The Redeemer Off Your Bookitlist?

Discover the majesty of Christ The Redeemer aswell as: Sugarloaf Mountain, Escadaria Selaron, Pedra da Gavea trail and the famous district of Ipanema on this 10 day adventure package holiday!

Top 10 Christmas Gifts For The Traveller In Your Life 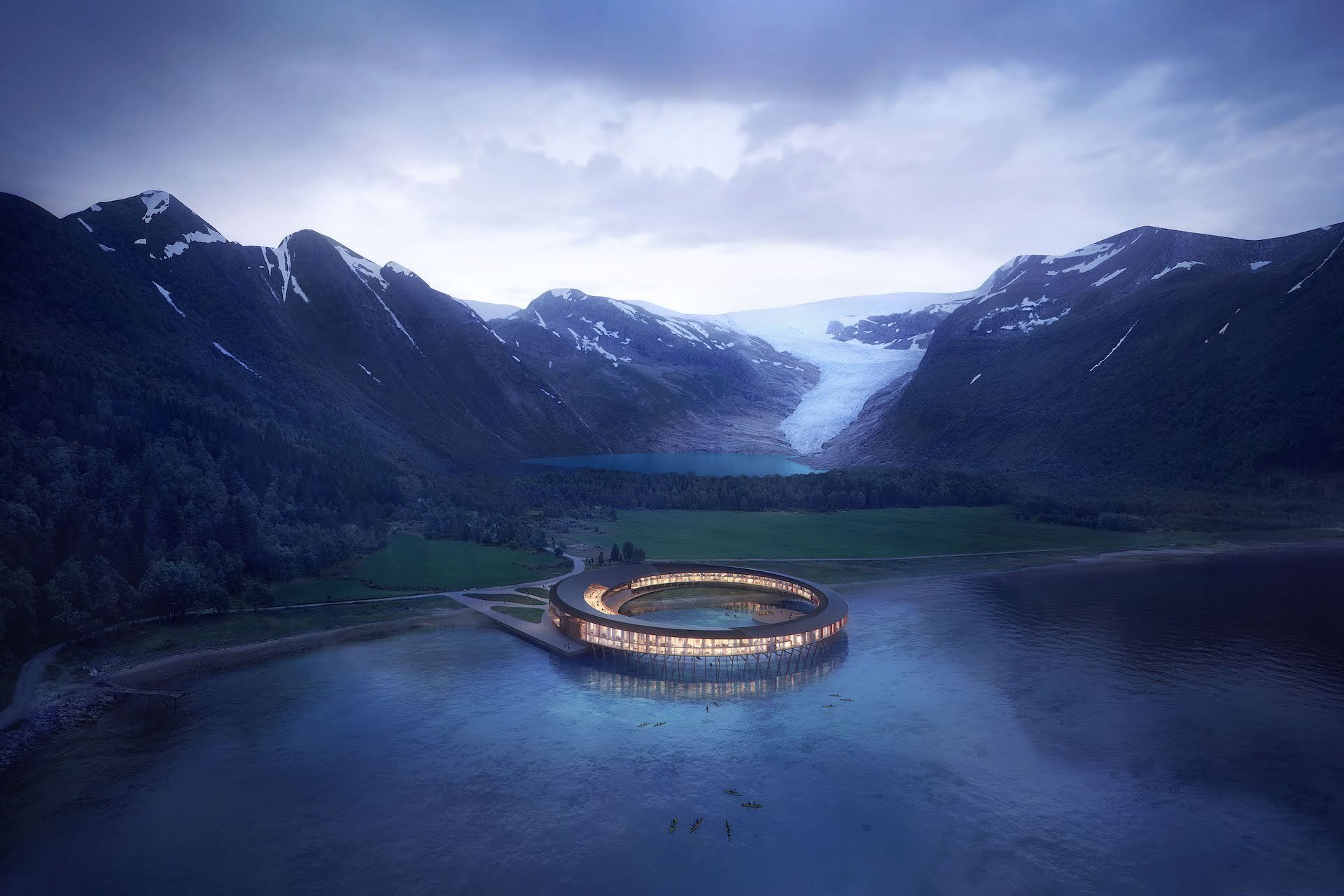