The moon-like landscapes of Cappadocia - BookitList

The moon-like landscapes of Cappadocia

I had seen pictures of Cappadocia before I arrived, but I was not expecting the magnitude of it. Cappadocia isn’t like anywhere else in the world, you’ll feel like you’ve landed in a whimsical fairy-tale with its honeycomb hills, fairy chimneys, unique rock formations and towering volcanic boulders.

We flew into Nevşehir-Kapadokya Airport from Istanbul (there are two airports you can fly into, but only from Istanbul so you will have a layover there before continuing to Cappadocia), and then took a 45 minute bus ride to Mithra Cave Hotel in Gerome (the puppy sold me on this hotel!) We stayed four days and three nights which was a perfect amount of time, I wouldn’t recommend staying any less than three days to give you enough time to explore the entire area and fit in the best activities. 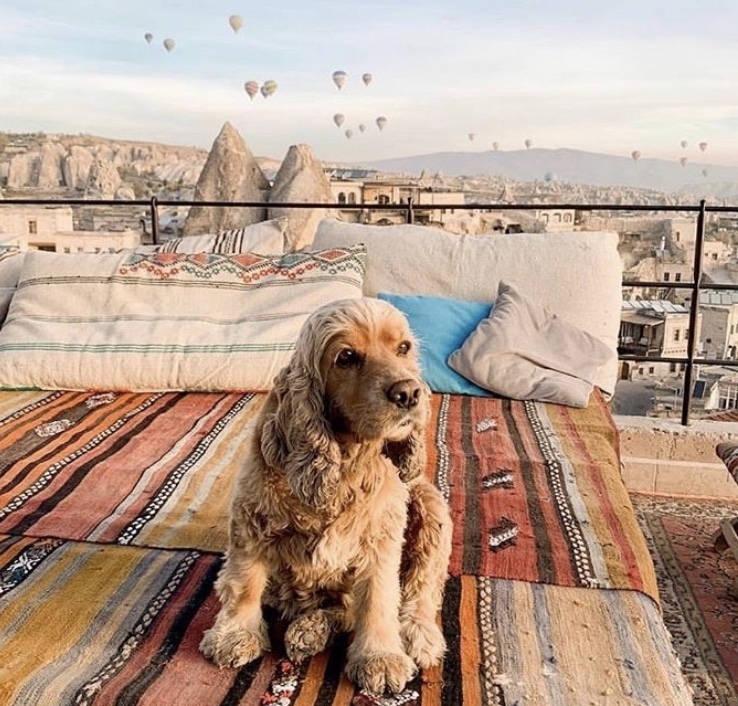 Of course the first morning we were there, and every morning then on, we woke up in time to watch the hot air balloons around 30 minutes before sunrise. Most hotels deck out their rooftop areas with full breakfasts and Turkish rugs for those perfect Instagram shots 😉

In addition to watching the hot air balloons from the ground, you can also choose to take a hot air balloon ride, floating up at dusk with another 100 balloons as the sun paints the sky with shades of orange and pink has to be one of the most magical things. (We very stupidly didn’t book our tour in advance and once you are there the majority of companies are booked up! So make sure you book before travelling). 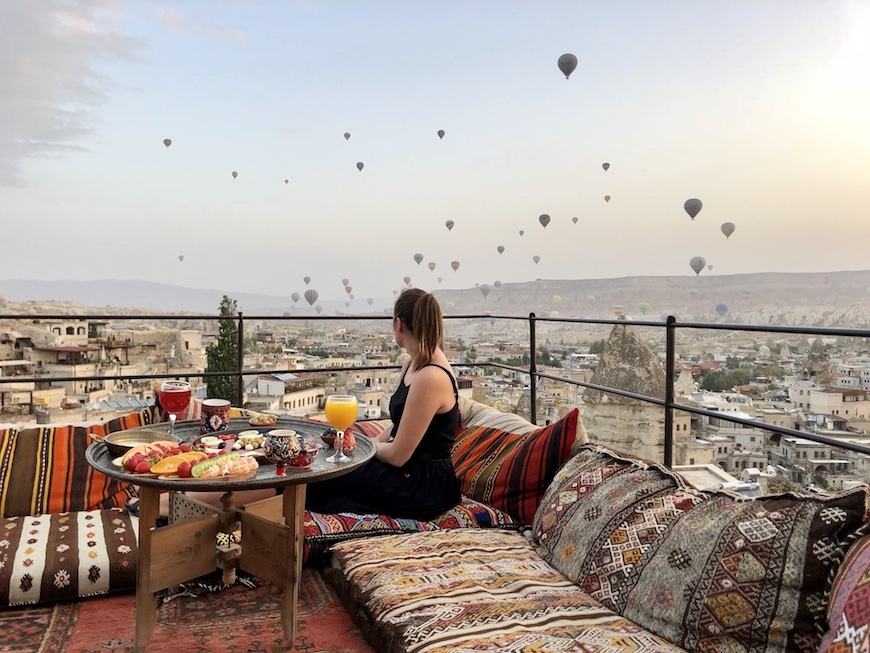 Balloons from the hotel rooftop

We spent the next couple of days between a tour and visiting some attractions ourselves.

One of Cappadocia’s main attractions, this is one we visited ourselves due to it being walking distance from our hotel. It has a massive collection of historical monasteries and cave churches. I would recommend getting a tour guide for this visit to give you their knowledge on the history of early Christianity.

Overlooking the Pigeon Valley in Cappadocia was a gorgeous tree decorated with cobalt blue amulets and nazar trinkets. Evil Eye has a deep cultural symbolism. The talisman is fixed to anything perceived to attract greed, envy, or ill-will to ward off the evil eye and are found on everything around Cappadocia, from key chains to being embedded into shop walls. I still have the one that our bed throw we bought came wrapped in! 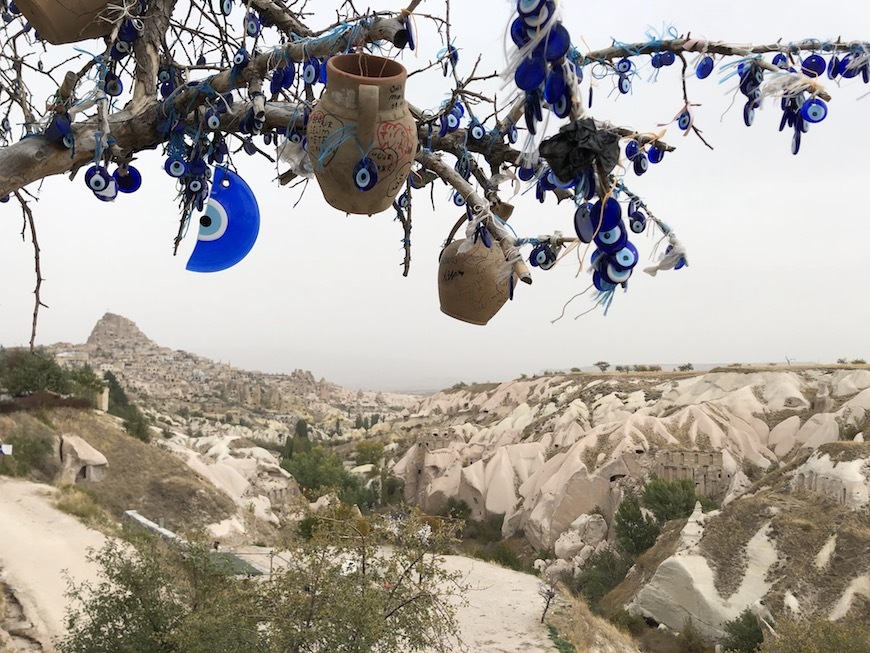 We visited this ancient multi level underground city as part of a tour booked through the hotel. It was used to house up to 20,000 Christians living in secrecy to escape the persecution of Roman soldiers. But don’t be fooled, this underground system had all the space expected of a city, including wine cellars, stables, chapels and a hospital. I would definitely recommend doing this with a guide as without you will be unable to tell which room you are standing in and the history behind it.

Situated in a remote and deserted valley surrounded by hills, the crater lake was formed when a volcano blew its top and the hot sulphurous water surging out from the south and north shores of the lake is supposed to be useful in treating rheumatism and many skin conditions. For those who want to bathe in these healing waters, a new hotel offers a small pool where you can pay to swim in the hot water before continuing on your way. 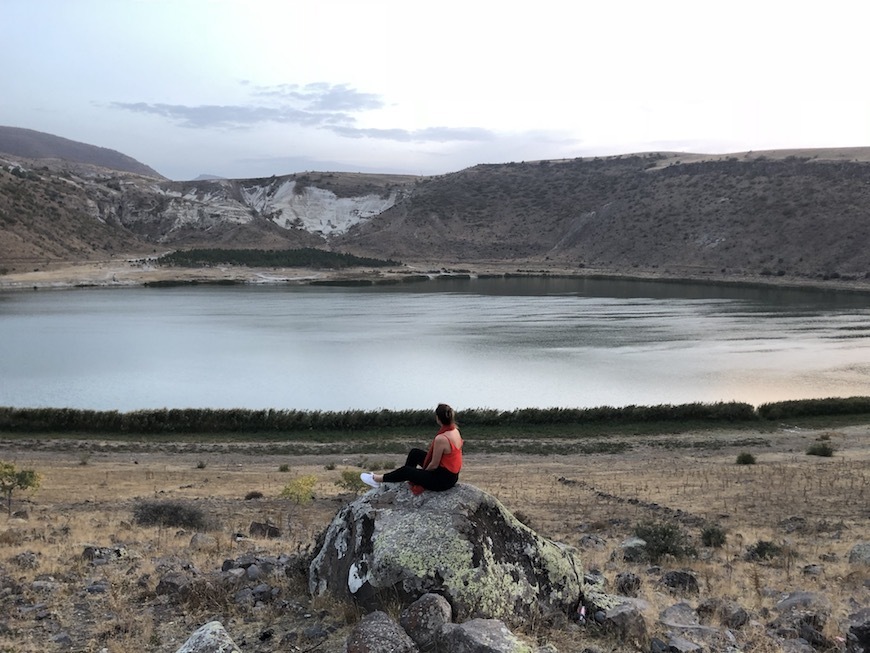 So I'm not usually one for spas and beauty therapies, but I had read great things about a Turkish Bath (or hamam) so it was definitely something on my list to do whilst here. Although, I hadn't quite read fully into what it entailed, so it was definitely an experience!

When you enter the Turkish bath you will be given a small, thin towel which you will wear throughout the experience (you can wear a swimsuit underneath if it makes you feel more comfortable, although I only read this AFTER!) You can either choose the traditional steam room or a dry sauna in order to soften the skin for the next phase of the Turkish bath. Next, an exfoliating glove is adorned by a bath attendant and the scrubbing begins. After a quick rinse throwing water over you and a farewell to billions of dead skin cells the best part still awaits: the bubble massage. While lying on the heated marble slab, the bath attendant makes a sweeping motion with a soap-drenched pillowcase(?) to cover your body in bubbles. The massage commences and you are then able to shower off, my skin felt a-mazing after this! 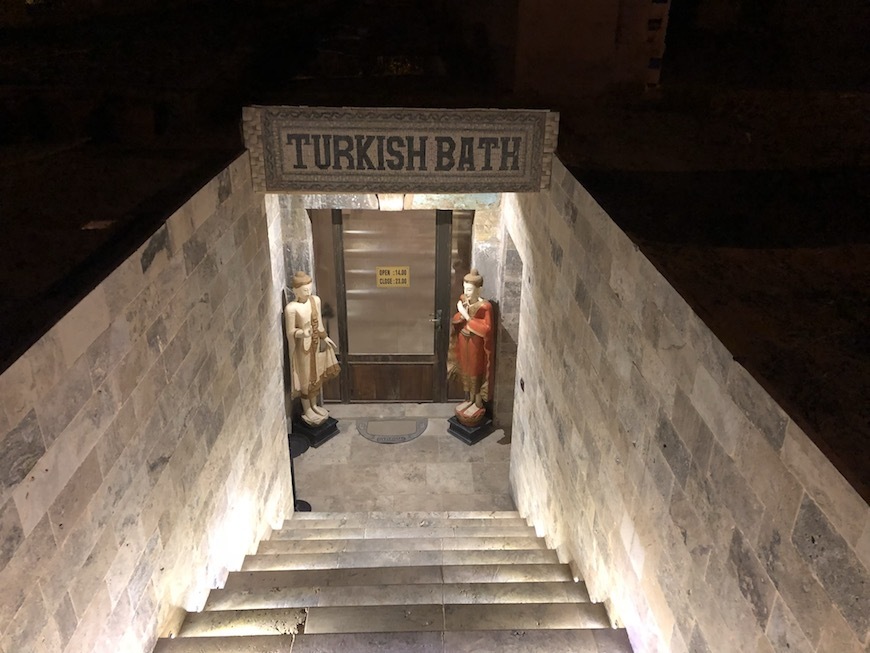 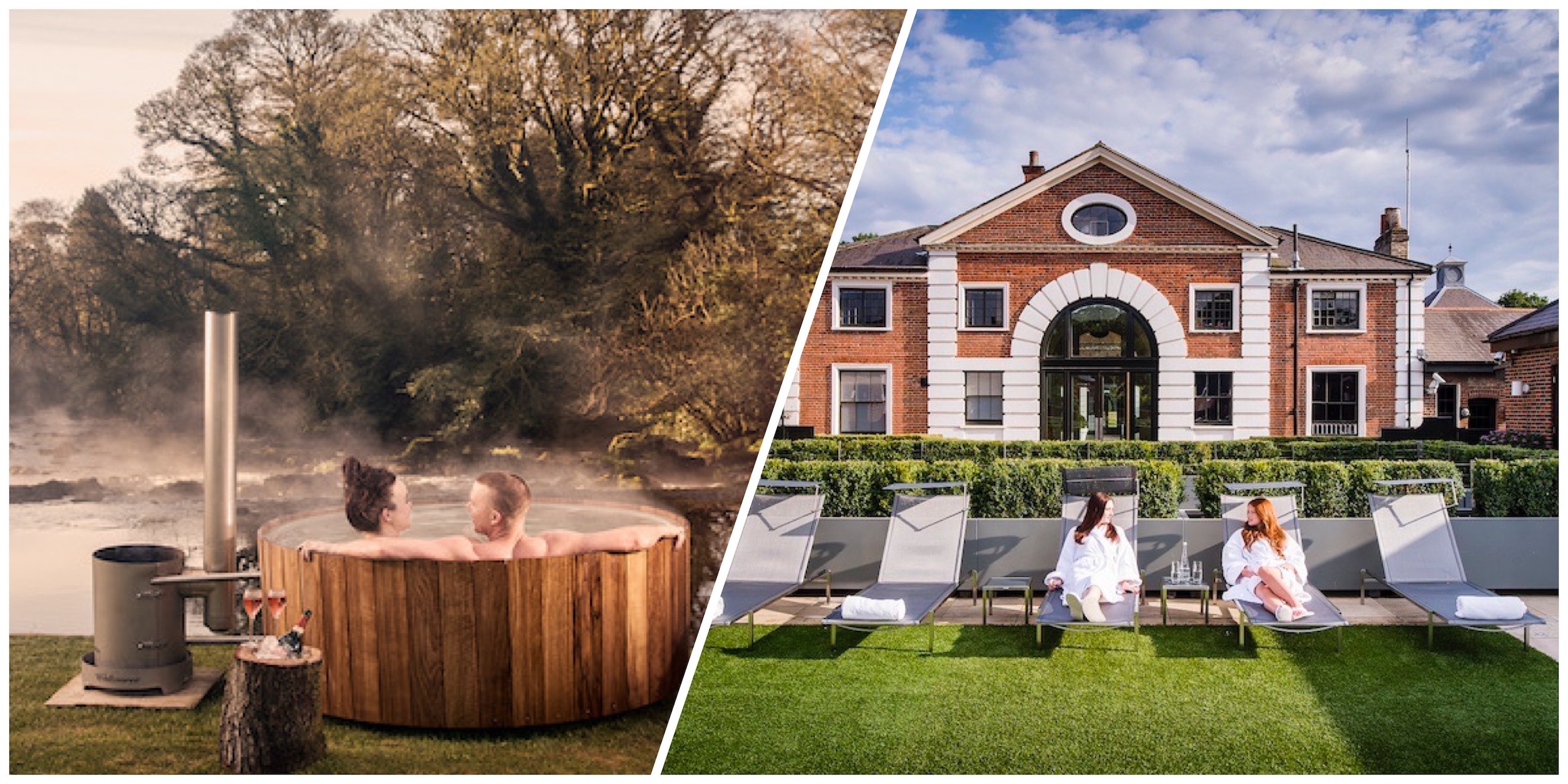 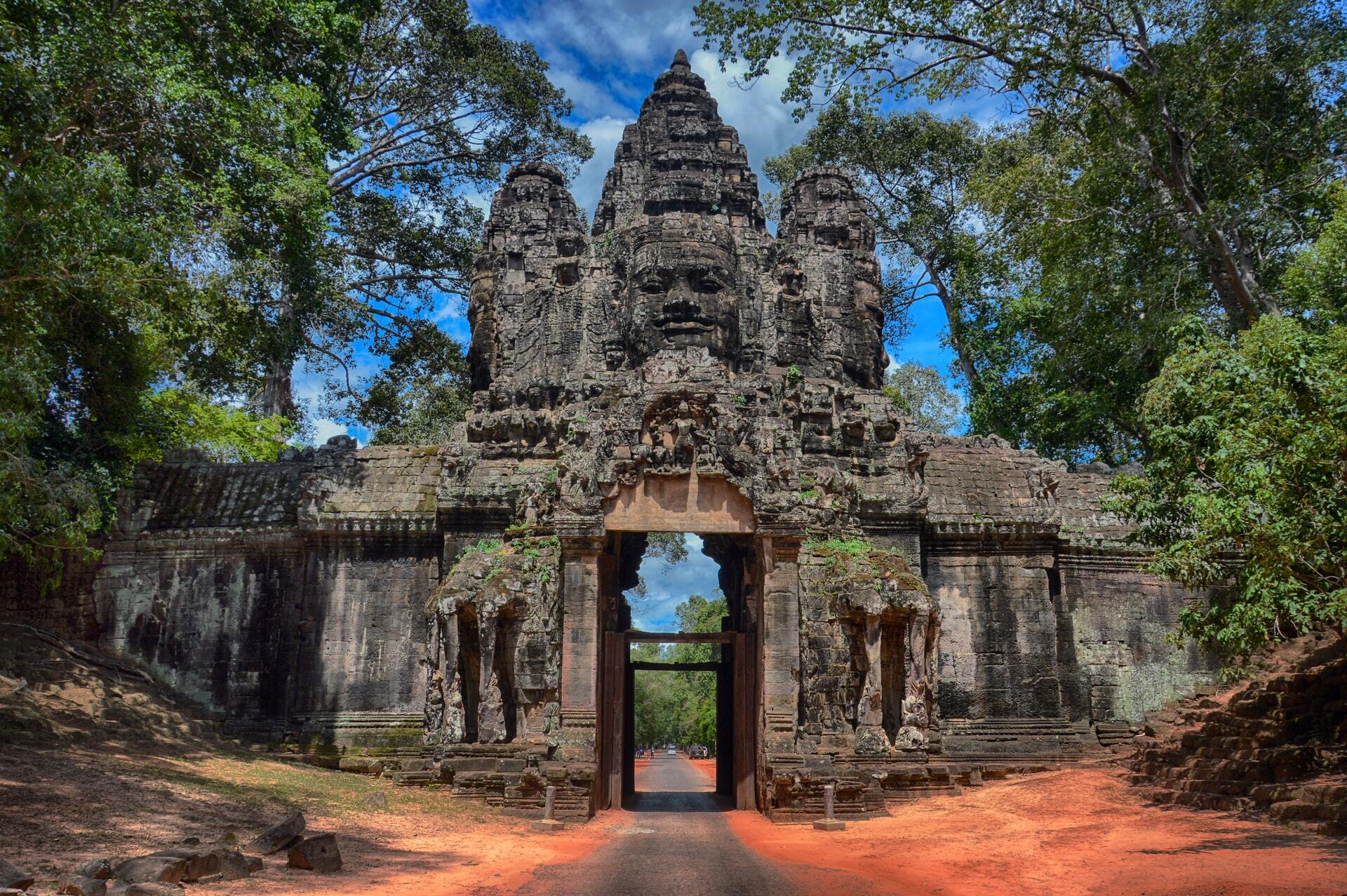